AWS CloudFormation is an infrastructure-as-code tool that defines resources and their configurations in a standardized template — either a JavaScript Object Notation (JSON) or YAML format. In general, YAML is the preferable option, as it’s more concise; JSON requires a much higher number of characters. YAML also supports the ability to add comments, which JSON does not.

Admins can version and maintain CloudFormation templates as part of a suite of operational components. A key concept in CloudFormation is a stack. A stack is an AWS resource that is created in addition to the resources configured in the template. A CloudFormation stack groups, launches and manages all the resources defined in a template. Even though a stack could technically contain as little as a single resource, its optimal use case is one where multiple resources launch together.

Use CloudFormation to deploy an EC2 instance

There are required parameters to define before you can launch the CloudFormation stack that will deploy the EC2 instance. These parameters include the following:

For this example, we will assume a key pair was already created and a security group ID is already known, prior to creating the EC2 instance.

Step 1. When defining a CloudFormation template, it is mandatory to specify a Resources block and declare all the relevant AWS resources under it. The most basic block to launch an EC2 instance in CloudFormation would look like this:

In addition to the essential configurations shown above, there are more than 40 parameters that one can configure when launching an EC2 instance. The following are important parameters that are highly recommended to include:

Step 3. Select the option Template is ready and Upload a template file.

Step 4. Define the stack name and, if there is a parameters section in the template, specify those parameters. 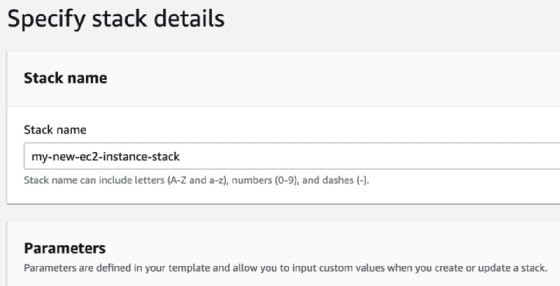 Next, select advanced options for the deployment. These options include resource tags, IAM roles, stack failure options — rollback or preserve resources — and termination protection. Next, there is a confirmation page that includes a button to create the stack.

Once you create the stack, it will appear as CREATE_COMPLETE in the CloudFormation console. There are several tabs in the console that provide more information about the stack.