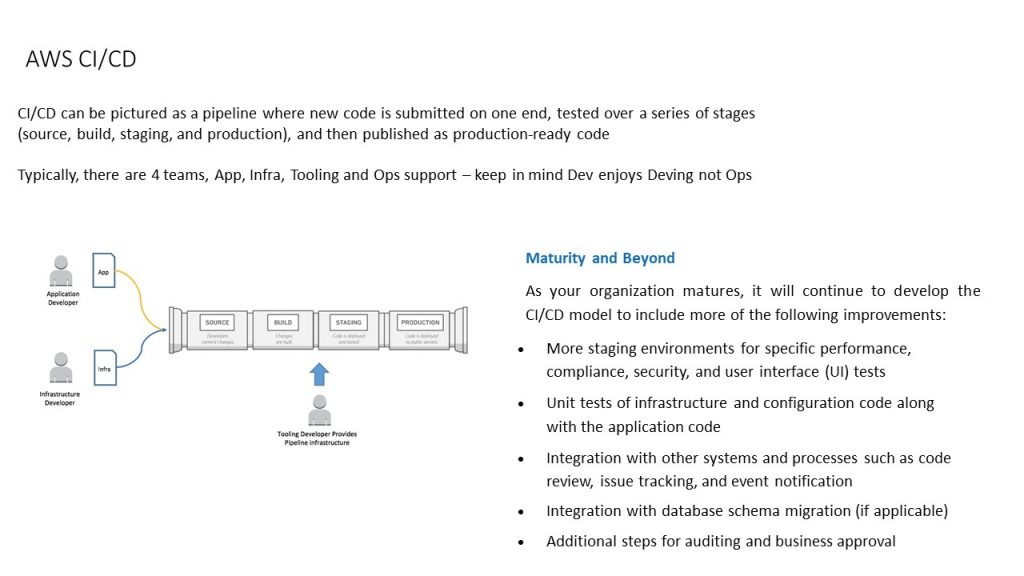 Continuous integration (CI) is a software development practice where developers regularly merge their code changes into a central repository, after which automated builds and tests are run. CI most often refers to the build or integration stage of the software release process and requires both an automation component (e.g., a CI or build service) and a cultural component (e.g., learning to integrate frequently). The key goals of CI are to find and address bugs more quickly, improve software quality, and reduce the time it takes to validate and release new software updates.

Continuous integration focuses on smaller commits and smaller code changes to integrate. A developer commits code at regular intervals, at minimum once a day. The developer pulls code from the code repository to ensure the code on the local host is merged before pushing to the build server. At this stage the build server runs the various tests and either accepts or rejects the code commit.

The basic challenges of implementing CI include more frequent commits to the common codebase, maintaining a single source code repository, automating builds, and automating testing. Additional challenges include testing in similar environments to production, providing visibility of the process to the team, and allowing developers to easily obtain any version of the application.

Continuous delivery (CD) is a software development practice where code changes are automatically built, tested, and prepared for production release. It expands on continuous integration by deploying all code changes to a testing environment, a production environment, or both after the build stage has been completed. Continuous delivery can be fully automated with a workflow process or partially automated with manual steps at critical points. When continuous delivery is properly implemented, developers always have a deployment-ready build artifact that has passed through a standardized test process.

With continuous deployment, revisions are deployed to a production environment automatically without explicit approval from a developer, making the entire software release process automated. This, in turn, allows for a continuous customer feedback loop early in the product lifecycle.

Before deploying a change to production, you can implement a decision process to ensure that the production deployment is authorized and audited. This decision can be made by a person and then executed by the tooling.

Key Take Away: Using continuous delivery, the decision to go live becomes a business decision, not a technical one.  The technical validation happens on every commit.

Rolling out a change to production is not a disruptive event. Deployment doesn’t require the technical team to stop working on the next set of changes, and it doesn’t need a project plan, handover documentation, or a maintenance window. Deployment becomes a repeatable process that has been carried out and proven multiple times in testing environments.

CD provides a method for your team to check in code that is automatically built, tested, and prepared for release to production so that your software delivery is efficient, resilient, rapid, and secure.

Key Take Away: CD practices help improve productivity by freeing developers from manual tasks, untangling complex dependencies, and returning focus to delivering new features in software. Instead of integrating their code with other parts of the business and spending cycles on how to deploy this code to a platform, developers can focus on coding logic and quality.

CD can help you discover and address errors early in the delivery process before they grow into larger problems later. The team can easily perform additional types of code tests because the entire process has been automated. With the discipline of more testing more frequently, teams can iterate faster with immediate feedback on the impact of changes. This enables teams to drive quality code with a high assurance of stability and security. Developers will know through immediate feedback whether the new code works and whether any breaking changes or bugs were introduced. Mistakes caught early on in the development process are the easiest to fix.

When CI/CD is implemented, the velocity of the entire team, including the release of features and bug fixes, is increased. Enterprises can respond faster to market changes, security challenges, customer needs, and cost pressures. For example, if a new security feature is required, your team can implement CI/CD with automated testing to introduce the fix quickly and reliably to production systems with high confidence. What used to take weeks and months can now be done in days or even hours.

To help firms with their DevSecOps journey, AWS has a number of certified DevSecOps Partners who can provide resources and tooling. There is also a good AWS Whitepaper resource on the approach, maturity and sustainability:AWS Cloud Transformation Maturity whitepaper.