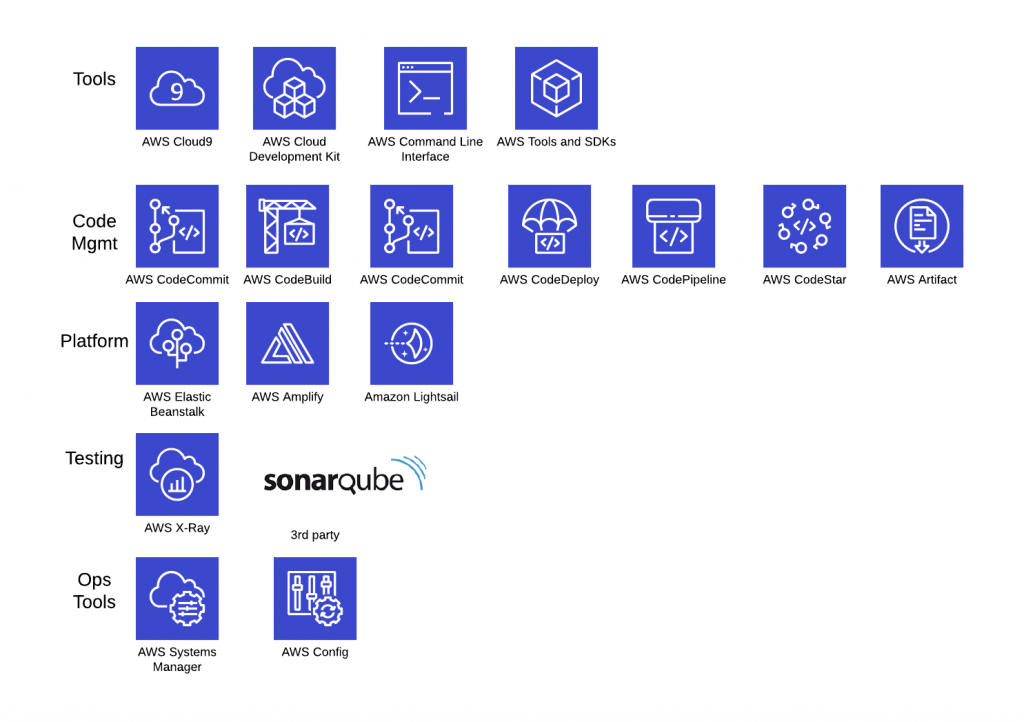 DevOps is a combination of specific engineering practices and patterns, followed by cultural changes that increase an organization’s or team’s ability to deliver high-quality products quickly.  Most organizations have adopted DevOps to some extent, and over time, several practices emerged, which can be broadly categorized into:

The interest in DevOps and related technologies in recent years has pushed leading cloud providers, such as AWS, to provide all the necessary tools and technologies for organizations to implement and adopt DevOps practices successfully. Providers also look to increase value to their customers by delivering more reliable products at a faster pace than traditional deployment cycles.

AWS simplifies the process to build and manage infrastructure, ship code faster to applications and monitor the infrastructure and application, all while measuring application performance or telemetry. For each of the previously mentioned DevOps practices, AWS offers specific tools, such as:

Apart from these tools, AWS offers other tool sets, services and platforms organizations use to deploy to the cloud easily, consistently and quickly, like AWS Elastic Beanstalk and Amazon Elastic Kubernetes Service (Amazon EKS).

AWS offers a variety of services to organizations that practice DevOps and facilitate rapid build, test and delivery for complex environments that can scale. Below are some AWS developer tools and descriptions that can help organizations start their DevOps journey on AWS, categorized by practice.

Continuous integration is a development practice to push and merge code changes into a centralized code repository. These are integrated continuously to detect changes and run a predefined set of automated actions, such as tests, scans and builds.

AWS offers several tools to help with the practice:

Continuous delivery, as the name suggests, focuses primarily on deploying code or configuration changes automatically when a change is detected in a source code repository. This ensures all changes developers push — regardless of how small — are deployed, tested and validated immediately. Because the small changes are deployed continuously in case of any issues or bugs, it is easier to detect the bug and revert back those changes. AWS DevOps tools that support this process include:

Observability into infrastructure health and application performance to detect failures, outages and performance bottlenecks is critical for every organization. To ensure everything is running at desired levels and state, AWS provides two different services for monitoring and logging.

A single cloud provider cannot always provide the best tools for a domain as vast as a DevOps ecosystem, which AWS acknowledges via integrations with most third-party tools to give organizations the flexibility to choose what arrangement of tools, services and platforms works for them.

The following are some third-party tools that work well with AWS, broken into various DevOps categories:

How to create a CI/CD pipeline in AWS

One can create a simple CI/CD pipeline in AWS.

This pipeline will be triggered each time there is a new commit record in the CodeCommit repository. Once deployment completes, the static website will display any changes.