(Steps to deploy a Jenkins build server in AWS https://d1.awsstatic.com/Projects/P5505030/aws-project_Jenkins-build-server.pdf)

Continuous integration takes code from source control to deployment readiness in a centralized repository. DevOps teams can also turn code into an artifact for a build pipeline. The benefits of a CI/CD pipeline are significant and tangible, but how should a DevOps team choose its CI tool?

Consider Jenkins, a long-established and well-known CI platform. The automation server is free and open source, though enterprise developers can pay for supported versions, such as CloudBees CI. As a CI automation server, Jenkins automatically kicks off steps in the CI/CD pipeline. The platform interacts with other tools in the pipeline, such as artifact and source code repositories, configuration management software and automation tools.

Jenkins officially began in 2011 and developed for years before that in other permutations. It has a long history of operations for a CI/CD tool. Its availability as open source code enables the creators, community contributors and users to participate in the tool’s functionality, maintenance and roadmap, as an open-source product. The Jenkins community estimates it has more than 1,000,000 users, and it operates nine special interest groups.

Jenkins isn’t the only option for CI, but its characteristics make the server a contender for diverse development scenarios. The top five benefits of Jenkins are found in procurement, plugins, hosting options, community and integration. These benefits encapsulate what a DevOps team should look for in CI/CD tools. 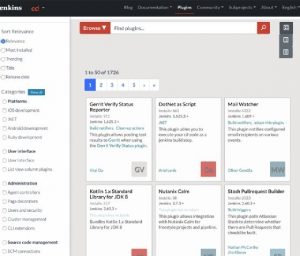 Developers and DevOps teams don’t want to worry about procurement costs for code pipelines. They simply want to build code into an artifact or have a central location to standardize code deployments. To evaluate a CI tool, these software teams want access for trial scenarios. Tool evaluators also must ensure that a tool’s use can scale up across the team or company without creating a budget problem.

The open-source automation server can run on premises in a virtual environment or on the cloud in a VM. It also can run in a Docker container for high portability and scalability, as described later.

One of the primary advantages of Jenkins is the range of plugins available for the platform. Jenkins’s plugins can be developed by anyone, for anyone.

Plugins are available in Jenkins

Jenkins provides some of the top plugins for CI. They’re diverse, ranging from on-premises to cloud. Companies that use major cloud providers can integrate their deployments with Jenkins via plugins. For example, Microsoft Azure users can run CI processes from Azure DevOps to Jenkins and vice versa.

Since plugin variety is a major benefit of Jenkins, you should get familiar with some of the top plugins available:

Jenkins can be deployed in the Cloud, a container, or locally.

Jenkins installs and deploys on Microsoft Windows, any Linux distribution and Apple MacOS. Because Jenkins can run on any OS, the IT team can install the CI server regardless of the company’s systems.

Organizations run Jenkins in the cloud by downloading and deploying it on a VM. Alternatively, use one of the prebuilt images from providers like AWS and Azure.

Jenkins can run on a Docker container. The IT team can scale and orchestrate the CI tool using Kubernetes. Use the free official Jenkins image on Docker Hub.

Integration with other CI/CD platforms

Jenkins offers distinct benefits for software development, but that doesn’t mean it’s the only option for a CI/CD pipeline, or the only CI choice in the organization.

Jenkins, for example, can work alongside another platform a software team uses for continuous delivery. Or, a team might integrate the CI and build portion of a pipeline with another tool, then use Jenkins to build and store the application’s artifacts.