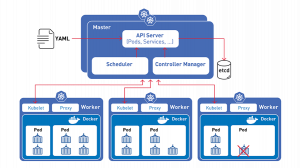 A record number of organizations were using containers and Kubernetes to run their enterprise applications last year, according to the Cloud Native Computing Foundation’s (CNCF) latest survey of software and devops engineers.

While a record 96% of respondents said they were using or evaluating Kubernetes last year, that number drops to 60% when asked if they are running the container orchestration platform in production.

Naturally, the CNCF is going to attract early adopters of cloud native technology, but it is still interesting to see how many respondents are looking to offload the management of their clusters as containers become foundational pieces.

Hand-tuning your own Kubernetes clusters is hard work, so it’s not surprising to see 79% of respondents offloading some of these operational tasks onto a certified, hosted Kubernetes platform. Furthermore, 90% of Kubernetes users have turned to cloud-managed services, according to data provided by cloud monitoring specialist Datadog. This is up from 70% in 2020.

“With this de facto status, Kubernetes is now going “under the hood” similar to Linux, with more organizations leveraging managed services and packaged platforms,” the survey authors noted.

The most popular of these managed services, according to the survey, is Amazon’s Elastic Container Service for Kubernetes (EKS), followed by the Microsoft Azure Kubernetes Service (AKS) and Google’s Kubernetes Engine (GKE) in third.

The CNCF survey was compiled in two parts last year, eventually covering 3,800 respondents across the globe between April and November 2021. The survey also incorporated production data from partners Datadog and New Relic and insights from SlashData for the first time.

“Kubernetes adoption among the ever-expanding cloud native community is approaching 100%, meaning those investing in cloud native are strongly bought in and excited for the future,” CNCF executive director Priyanka Sharma said in a statement. “Our data also demonstrates how ubiquitous cloud native is, whether it is being deployed in-house or as a managed service. I believe 2022 will be a banner year for emerging areas of cloud native like edge, observability, and security as container infrastructures continue to mature both on the surface and under the hood.”