How to integrate Metric Streams with Splunk Infrastructure Monitoring 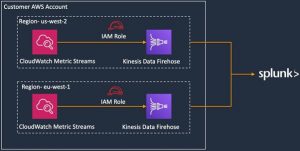 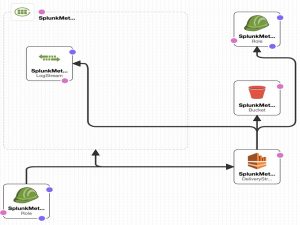 Direct links to all available CFN templates are available in the documentation.

As a final step, make an API call to Splunk and update the integration:

1) Do a HTTP Get https://api.<realm>.signalfx.com/v2/integration to get integration object 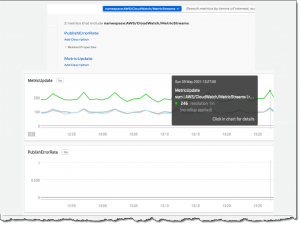 2) Do a PUT request to the https://api.<realm>.signalfx.com/v2/integration/<integration-id> endpoint and update the payload you got from HTTP Get by adding the following

Metric streams emit CloudWatch metrics about their health and operation in the AWS/CloudWatch/MetricStreams namespace. The following metrics are available to track the number of metrics deposited to Metric Streams:

MetricUpdate: The number metric updates sent to the metric stream. If no metric updates are streamed during a time period, a value of 0 is emitted for this metric. Use the statistics function Sum to see the total number of metrics received per time interval.

PublishErrorRate: The number of unrecoverable errors that occur when putting data into the Kinesis Data Firehose delivery stream. If no errors occur during a time period, a value of 0 is emitted for this metric.

Splunk Infrastructure Monitoring is purpose-built to address the needs of ephemeral cloud, containers, and serverless environments with high-cardinality at massive scale. Driven by our patented streaming architecture, our approach to ingest, store and retrieve data is fundamentally different from traditional batch and query solutions.

As metric data streams into Splunk, metadata is separated from metric value data as they serve separate use cases — human-readable metadata is a central tenant in cloud-native environments to search, filter, sort, and group, while metric values are analyzed by the SignalFlow™ engine and directly streamed to components that need them such as dashboards, alerts, and automation.

In addition, while the data is streaming in the system, data points are rolled up into multiple aggregates for faster analytics and data accuracy by dynamically handling data lag.

This architecture means that you get insights and can take quick action — dashboards refresh, alerts fire, and automation tasks trigger within seconds as compared to tens of minutes with other solutions. Customers have achieved up to 90% faster mean-time-to-detect and improved DevOps productivity by 8x with Splunk Infrastructure Monitoring.

The new support for CloudWatch Metric Streams uses Kinesis Data Firehose to deliver CloudWatch metrics data to Splunk and enables low-latency observability into AWS services. And, with more than 200 out-of-the-box integrations, you can monitor your entire cloud stack from one single solution.