Kong API Gateway sits in front of the backend API services.  The gateway forwards client requests to those services.  Kong is the first point that the client or requesting application will hit.  Kong can transform and route the requests and responses, based on the gateway’s configuration and policies.  This means that it is possible to manipulate requests and responses by adding, appending, or removing headers dynamically, and routing them to the proper service.

Kong has an abstraction layer which provides additional features as well with plugins including authentication, rate limiting, caching, logging, botdetection, IP restriction and CORS and many more.  These plugins allow the client to focus on business logic and not lower-level application and infrastructure logging or integration.

Kong usually runs as a docker container on a Linux distribution in the Cloud or on -premises.  It is sometimes used as a Kubernetes ingress controller.

Kong is built on top of Nginx and by using its own admin API, it configures the nginx server to provide proxying for backend services.

Kong uses OpenResty which is an enhanced version of nginx that includes a Lua-nginx-module. Kong is distributed along with OpenResty to leverage its Lua scripting capability to configure and extend nginx.

Kong accepts the reverse proxying directives via its own admin API over http/s, translates them to an nginx configuration using Lua scripting language and builds a gateway platform for micro service backends.

The Admin API is accessible on TCP/8001(http) and TCP/8444(https) ports.  As a security best practice, Admin API ports are for internal use and should be firewalled.

Kong listens on TCP/8001(http) and 8443(https) ports to receive end-user requests and according the configuration you define, forwards to your endpoints. Those ports are publicly facing services that must allow external connections.

Kong uses an external database to store configurations data. Pass the configuration directives to the admin API and Kong stores them in its datastore.  Multiple Kong servers can use a central database.  Supported datastores are Cassandra and PostgreSQL.  You can also use Aurora Postgres on AWS (DBaaS).

If the gateway cluster fails the application is unreachable, so the gateway must redundant and scalable. Kong uses the central DB to create multiple Kong nodes and a cluster. 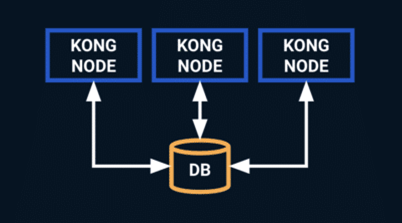 Kong is not a load balancer.  You must deploy a load-balancer in front of the Kong cluster to distribute traffic. If there is a need to handle more incoming requests, one can easily add more nodes horizontally by installing Kong on the new nodes and pointing them to the central datastore.

It is straightforward to track Kong cluster resources utilization (by collecting metrics via plugins) and decide to scale up or down automatically. Kong installation and initial configuration is a quite straightforward process which can be easily automated using Terraform or similar IaC.

CP nodes provide the Admin API and are the only components that interact with the central datastore, and DP nodes (which handle incoming requests), must fetch their configuration from a CP node. 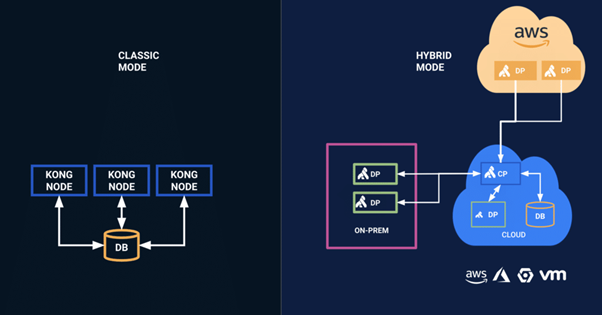 Kong has many plugins found on the Kong Plugin Hub.

This provides authentication mechanisms to the backend services; and it’s possible to use different mechanism for each service.  For example, while service-A is using basic authentication, service-B only accepts request with JWT token.  Supported modes include:

The decoupled nature of microservices increases the complication of Observability (monitoring and logging). Kong is an API gateway which sits between clients and services.  As an intermediary it contains many important metrics for both infrastructure and application logging and tracing.  Datadog is commonly used for metrics and dashboarding and Splunk is used for activity and infrastructure logging and analysis including security.

Logs (Splunk, fluentd, Data Dog or similar) are collected, parsed, stored and visualized (Dashboards). Kong has plugins to ship logs to remote logging systems in various ways to make them to be processed!

Each component runs on top of Docker.

1-Datastore eg. Postgres SQL Docker container on one of the RHEL instances.  (For production this must be made redundant, HA by using a replica cluster).  IP address example: 10.10.10.11

Deploy Docker onto the Nodes.

Next, switch to one of the Kong node instances and run a bootstrap command to make initial configuration on the DB such as creating schema etc by pointing to the Postgres host via Kong_PG_Host parameter.

Start the Kong container on every node via the command set.

KONG_DATABASE and KONG_PG_* Defines which datastore Kong node will connect to.

KONG_{PROXY|ADMIN}_{ACCESS|ERROR}_LOG As a common containerized application approach, this parameters redirects admin API and proxy http logs to stdout and stderr by its category.

Configures addresses and ports on which the proxy and admin API should listen for HTTP/HTTPS traffic.

Backlog=N parameter, sets the maximum length for the queue of pending TCP connections. This number should not be too small in order to prevent clients seeing “Connection refused” error connecting to a busy Kong node.

There is also a net.core.somaxconn parameter, and this needs to be increased at the same time to match or exceed the backlog number.

Use a curl command to call the local hosts.  If live, a JSON output is returned that shows the configuration.

In order to expose the admin API securely, adding fine-grained access control measures such as authentication and authorization is mandatory.  This can be done manually or with the Kong plugins.